Our CEO was interviewed on Dutch radio 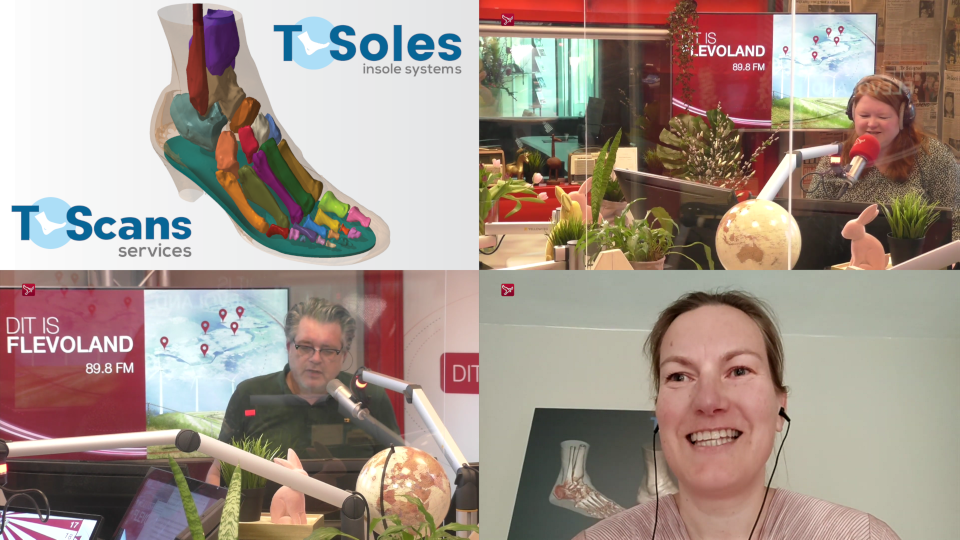 Our founder Caroline van Heijkamp was interviewed on live Dutch radio by Omroep Flevoland. Flevoland is a province of the Netherlands where our T-Scans practice is located, in the city of Almere. At T-Scans, it is possible to have both feet scanned simultaneously while standing upright. In Dutch hospitals scans are made lying down in a traditional CT-scanner. However, to view the actual foot problem it is imperative to stand and put weight on the feet.

Caroline explained: “A flat foot looks like a regular healthy foot when lying down in a traditional CT-scanner, because the space between the bones and ligaments changes, due to a lack of weight on the foot bones. Only when standing in our T-Scans scanner and putting weight on the feet, the flat foot will reveal itself and be visible.”

Caroline further talked about the sister company T-Soles, where her team is developing the future of personalized products based on weight bearing scans. T-Soles has developed a system which is able to design and 3D print insoles based on the scans from T-Scans. The next step for T-Soles is testing with a cutting-edge 3D printer. “Testing is key to make sure that the printed insoles match the feet and the shoes perfectly, and to make sure that they correspond to the design generated by our software. Our insoles will fit feet perfectly, in all shoe styles.”

Weight-bearing scans by T-Scans next to personalized perfectly fitting insoles by T-Soles: two birds with one stone.